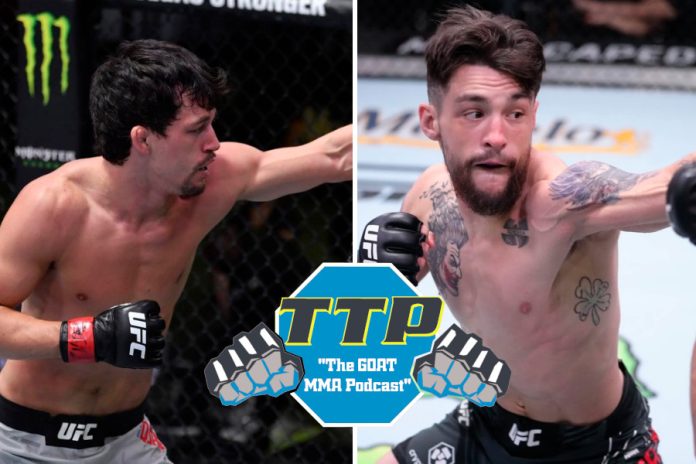 Kicking off this edition of TTP is our interview with UFC featherweight, Billy Quarantillo. Quarantillo discusses the tough decision he had to make to pull out of his fight earlier this year against Bill Algeo. He shares information about the injury, but also why it was extra difficult given the venue for that fight. While losing that fight was rough, he was pumped to be offered possibly a bigger fight on yet another big pay-per-view card. He’ll face former ranked lightweight Alexander Hernandez at UFC 282.

UFC Orlando gave us tons of action, but it’s no time to sit back and reflect. There’s yet another UFC card right around the corner and we’re breaking it down for you. UFC 282 comes at you live from the T-Mobile Arena in LAs Vegas. Headlined by a fight for the newly vacant light heavyweight title between Jan Blachowicz and Magomed Ankalaev, this one is packed with banger after banger. We’ll be breaking down some of the biggest fights on the card for you. Plus, we also have an underdog and a parlay that we think will make your wallet fat this Saturday. For this segment, all odds via FanDuel Sportsbook.

Closing out this week’s edition of TTP is an interview with UFC bantamweight, Jay Perrin. And boy, is Perrin fired up this week. He’ll face the highly touted 18-year old prospect, Raul Rosas Jr at UFC 282 and he’s got more than a few thoughts on the matchup. He goes in on the media that has been hyping Rosas up. He goes in on Rosas himself for all the trash talk. Perrin even goes in on Rosas’ skills and resume. You aren’t going to want to miss this one with “The Joker”, so tune in to the whole thing.