The UFC has begun rounding out its first quarter of events in 2023, and the promotion’s March 11 date now has a headliner.

Light heavyweights Anthony Smith (36-17) and Jamahal Hill (11-1, 1NC) are expected to headline the Fight Night card, which does not yet have a location or venue officially announced. MMA Island was first to report news of the match-up, while MMA Fighting broke the date.

Smith will be looking to bounce back from a loss to Magomed Ankalaev, in a fight that saw him suffer a leg injury early on. Ankalaev was recently announced as taking part in a short-notice title fight atop the UFC 282 card next month, while Smith saw a three-fight win streak snapped following their meeting.

Prior to the Ankalaev setback, Smith had defeated Jimmy Crute, Devin Clark, and Ryan Spann, securing a finish on all three occasions.

Jamahal Hill has won his last three fights, most recently securing a fourth-round TKO finish against the always-tough Thiago Santos. Prior to the Santos match-up, Hill stopped Johnny Walker and Jimmy Crute, both by knockout.

Hill has just a single loss to his name, a TKO defeat at the hands of Paul Craig during which “Sweet Dreams” sustained a memorable (and nasty) arm injury.

The UFC’s March 11, 2023 Fight Night card has one other fight reported for it, as flyweights Tyson Nam and Bruno Silva are expected to face off on that date. 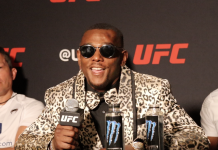