Whether your were aware of it initially or not, the Misfits Boxing 3 card set to go down in Austin, Texas on Saturday night had all but forced you to take notice.

For combat sports fans, there was almost no avoiding the card, set to stream on DAZN. First, Hasim Rahman Jr. — who had been briefly linked to a fight with Jake Paul at Madison Square Garden in New York back in August — lost his opponent, opening the door for former UFC heavyweight and ex-NFL’er Greg Hardy to step in.

In Hardy’s case, it was a considerable step up in competition in just his second pro boxing bout. On the other hand, he had a massive weight advantage over Rahman, which could help level the playing field given Hardy was stepping up on all of four days’ notice.

Then there was the antics of “mixed martial artist” Dillon Danis at Friday’s weigh-ins. Danis, 2-0 in Bellator but without a fight for years, managed to get in the face of Youtuber KSI, throwing a weak punch before being removed by security. Supposedly, the altercation was over the pair meeting in the ring, with Danis telling KSI to “sign the contract.”

Then, on his way out of the building, Danis was slugged by MMA fighter turned boxer Anthony Taylor, a fellow Bellator alum with far more experience than the BJJ expert.

Would the sideshow that broke out in the week leading up to the card translate to additional eyeballs on the product? DAZN and Misfits Boxing no doubt hoped so.

Misfits Boxing 3 takes place Saturday, November 19, 2022 at the Moody Center in Austin, TX. The action gets underway at 8PM ET. 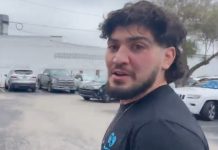