UFC Vegas 64 wasn’t a showstopper on paper (that applies more to next weekend’s UFC 281), but four fighters stood out when all was said and done.

On a night that boasted nine finishes — only two fights went the distance Saturday — Neil Magny, Mario Bautista, Polyana Viana, and Tamires Vidal all picked up $50,000 Performance of the Night bonuses.

No Fight of the Night was awarded Saturday, and given the number of stoppages, that’s not entirely surprising.

Perhaps no finish at UFC Vegas 64 had a bigger impact that Neil Magny’s submission of Daniel Rodriguez. “D-Rod” is a bit of a budding star for the promotion, but veteran Magny locked up a D’Arce choke in the third round of their co-main event welterweight fight. With the win, Magny now holds the record for most wins in UFC welterweight history, at 20, surpassing Georges St. Pierre.

Newcomer Tamires Vidal shocked fans with her octagon debut victory, meanwhile. She also shocked opponent Ramona Pascual, who came in heavy for the bantamweight fight, with a flying knee to end the fight in the opening round. Strawweight Polyana Viana packed plenty of power into her petite frame, knocking out former Invicta FC atomweight champ Jinh Yu Frey.

Finally, Mario Bautista showed some slick ground skills when he pulled off a reverse triangle arm-bar against Benito Lopez. 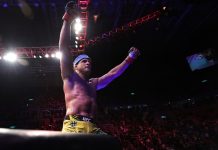