Las Vegas, NV – UFC flyweight Tagir Ulanbekov returns to the octagon this Saturday night looking to get back into the winning column when he takes on flyweight newcomer Nate Maness.

“Right after the fight I was extremely disappointed, and it took me a couple of days, maybe even weeks to get over it. Right now it’s already in the past, I forgot about it, and I’m focused on who I’m going to face on Saturday and on my new opponent. That is in the past now,” Ulanbekov told the media on Wednesday through a translator.

Ulanbevok was supposed to fight in the summer, but had to withdraw from that bout due to injury.

“I was supposed to fight on the same card with Umar (Nurmagomedov), but 12 days before the fight on my final sparring match I broke my rib. We spoke with the coaches, we spoke to the doctor, and we made the decision that it would be smart to pull out,” he said.

Now he faces a new, but not really new, opponent in Nate Maness who lost to Umar Nurmagomedov in his last fight.

“Nate is a very tough opponent. He’s very strong, but we already have a blueprint on how to beat him. My teammate Umar we have a tape on him, and how to do it exactly. We have a game plan. I’m just going to do what my teammate did, and get my hand raised,” said Ulanbekov.

“I really don’t care how’s he going to fight, what’s his game plan, I don’t think about that. My goal is to go out there, and get another win for our team. And that’s what I’m going to do.”

With a win over Maness, even though he’s unranked, would likely put a ranked opponent in front of him in his next fight.

“I’m sure we can all agree that if he was to fight any of the people in top 15 he’ll get couple wins there. It’s not like he’s not ranked and he’s a nobody. He’s a really, really good fight, and he’s worked to be in the rankings. Hopefully he will be one day, but after I beat him I’m pretty sure I’m going to go a couple numbers up,” he said.

Watch the entire media day scrum with Tagir Ulanbekov above. He takes on Nate Maness at UFC Vegas 64 on Saturday night. 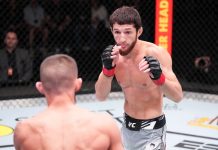