The much-ballyhooed bet between Jake Paul and Anderson Silva, in which Silva agreed to help Paul launch a fighter’s union if he lost Saturday’s boxing match with the Youtube star, appears to have been more than just smoke and mirrors.

Following Saturday’s card, Silva, who lost a unanimous decision on the scorecards despite giving Paul the best fight of his young career, confirmed his commitment to starting a fighter’s union with the social media standout.

“It’s not a UFC union, it’s a union for health and doing something better for MMA fighters,” Silva said following the fight, speaking to media outlets including Cageside Press. “I think Jake and I can do something huge to help this new generation.”

Paul has long talked about spearheading a unionization movement, specifically targeting UFC President Dana White with claims that he fails to adequately pay fighters. He went so far as to lambaste White in a music video earlier this year, featuring cameos from Cris Cyborg and Antonio McKee, notable fighters from the UFC’s past (and in Cyborg’s case, a former champ).

With Silva on board, however, maybe something will finally start to take shape.

As for the legendary “Spider,” at 47, Silva isn’t done just yet. “I can’t stop,” he said, translating for himself after being asked whether he’d continue on in his combat sports career by Portuguese-language media. “They asked me about if I stop or not, I can’t stop.”

“Yes, for sure,” he added, cementing his decision to fight on.

It’s something that has happened before, which left Silva with a feeling of disbelief it seems. “Of course, I have more experience, and I’ve done this a lot, and this has happened with me again, one more time,” he said. The last time it happened? His fight against Uriah Hall, which happened to be his final fight in the UFC. “I fell two times in that situation.”

Watch the full Paul vs. Silva post-fight press conference with Anderson Silva above. 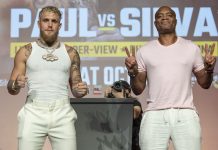