Saul Rogers says the confidence is back ahead of his Bellator 287 match-up with Tim Wilde.

Rogers (15-4) discussed that and more at Wednesday’s media day promoting the event, telling Cageside Press that he was excited to face an opponent he knows is going to bring it.

“You know what, when they offered me the fight, I was excited for this one. Tim always brings a fight, he always comes to fight,” Rogers (15-4) said. “I have not fought for about a year; this fight, I want to give the fans a little something. I know he’s going to come wild, and I’m coming to finish, so I’m [thrilled] to just have an opportunity to fight a guy that I know is going to bring it, he knows I’m 100% going to bring it, so this is going to be one for the fans, you know what I’m saying?”

Since arriving in Bellator, Rogers has been trading wins and losses. Saturday’s showdown in Milan, Italy affords him the opportunity to halt the trend.

“Know what, that’s what I need to be doing,” admitted Rogers. “I feel like when I’ve been a bit up and down with the wins and losses, I was fighting at featherweight. I don’t feel like the weight really suited me. Going back to that confidence, I lost a close decision loss to Daniel Weichel. I watch that fight back, I just shake my head, I’m so disappointed in myself because I have so much more to give.”

“Mads Burnell, watch that fight, that just wasn’t me in there,” he continued. “I feel like I’m at a weight class that suits my body type a lot more now, feeling much more healthier. I feel like when I take a shot, when I was at featherweight, I’d take a shot, I’d be dancing around the cage. The chin’s a l ot more solid at lightweight. I’m ready to go. I feel like lightweight’s going to be my division now where I can dominate and keep climbing up that ladder.”

Watch the full Bellator 287 media day appearance by Saul Rogers above. The event takes place this Saturday, October 29, 2022 at the Allianz Cloud Arena in Milan, Italy. 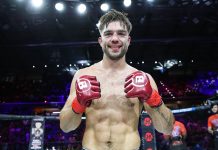 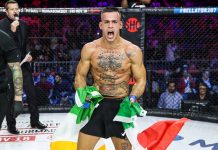 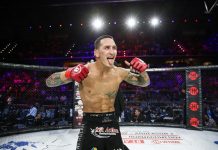