LFA 145 goes down this Friday in Oshkosh, Wisconsin, and we caught up with main event light heavyweight Jesse Murray ahead of the fight.

Murray (8-4) is a 2021 Dana White’s Contender Series alum who, while coming up short on the show, returned to the win column earlier this year. Now, he’s taking the next step towards getting back to a big show opportunity.

His fight against Alton Cunningham in June was crucial to “get the monkey off the back, as some people would say,” Murray told Cageside Press in an exclusive interview. He would go on to call the win “great, necessary. Obviously for the sport, but huge for mental.”

While some might be surprised that, with the LFA light heavyweight title vacant, Murray’s fight against Bruno Assis is not for the title, the fighter himself wasn’t expecting it. After all, while his profile got a boost from DWCS, Assis is coming in off a loss.

“It doesn’t really offend me. Titles for lower level shows that aren’t really the Big 3, they’re nice, but that’s all they really are, is something to hang in your room. They don’t pay any more money, you don’t get more televised stuff because of it. It’s more or less just me saying ‘hey, I won this.'”

As for the pairing with Assis, “I think it’s a great match-up actually,” Murray told us. “When I first took the fight, one of the things I had said was I hadn’t had a true jiu-jitsu style fighter, like a real hard grappling-style fighter, since Jason Butcher, which was a loss back in King of the Cage. After that fight, I had a couple match-ups that backed out that were straight grappling guys. That kind of confused me at the time, but I was like ‘apparently they just don’t want that kind of fight.’ And then after he [Assis] took this, I was like ‘yes finally!’ I guess I’d say some kind of payback’s in my brain, to make sure we can hang with that kind of person.”

That doesn’t mean Murray is going to wade right into the danger zone on the ground with Assis. “I’m not afraid to go down there whatsoever, but I’d prefer not to lean into where his main game in if I don’t have to.”

Instead, Murray foresees a finish on the feet. “I think I’m getting my hand raise by TKO. I don’t think he’s leaving himself open big enough for the one step-in giant shot, but if it happens, it happens. But I think I can wound him enough to put the damage in and get a stoppage.”

Watch our full interview with LFA 145 headliner Jesse Murray above. The event takes place on Friday, October 21, 2022 at the Oshkosh Arena in Oshkosh, Wisconsin, with the main card airing live on UFC Fight Pass. 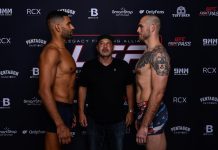