Another week with no UFC, ONE Championship, or Bellator MMA events put smaller regional shows like Cage Warriors in the spotlight. Airing Friday on UFC Fight Pass, Cage Warriors 144 featured a bantamweight title fight topping the show in Rome, Italy.

The bantamweight championship bout featured Dominique Wooding, a former Bellator MMA and BAMMA athlete, looking for his fourth straight win in four fights under the Cage Warriors banner. The 135lb champ had won the title last September, then defended it successfully care of a flying knee finish in December.

Challenger Martignoni was 2-1 (with a no contest due to an eye poke as well) under the Cage Warriors banner coming into the night.

Cage Warriors 144 takes place Friday, October 7, 2022 at the Fiera Roma in Rome, Italy. The full card streams live on UFC Fight Pass, with prelim action kicking off at 1:45PM ET. Full results from the event can be found below.

Scouting the Globe 2022: The Five Best Prospects From The UK 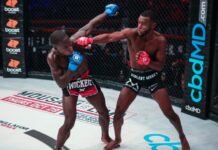