The first card of 2023 for the UFC arrives on January 14, and will be headlined by a middleweight clash.

Kelvin Gastelum (17-8, 1NC) will fight Nassourdine Imavov (12-3) atop the card, in a match-up that was originally supposed to transpire in April. French media outlet La Sueur was first to report news of the booking.

Gastelum would later confirm the pairing on social media.

The pair’s original date was scrapped when Imvav ran into visa troubles. That left Gastelum without a dance partner at UFC 273, and ultimately he fell off the card. By the time he steps into the octagon in January, it will have been nearly a year and a half between fights for The Ultimate Fighter 17 winner. He last competed in August of 2021, coming up short against Jared Cannonier.

Sitting at 1-5 in his last six fights, Gastelum is in must-win territory heading into the bout. Nassourdine Imavov, meanwhile, returned to the cage at UFC Paris earlier his month, notching a win over Joaquin Buckley.

Imavov has won three straight, with two finishes, and is currently ranked #12 in the weight class. Gastelum sits immediately in front of him at #11 under the UFC’s official rankings.

No venue, location, or broadcast plan has been announced for the UFC’s January 14, 2023 Fight Night card. No other fights have been reported for the event. 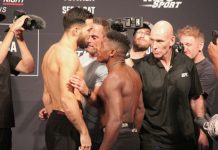