With welterweight, featherweight, heavyweight, light heavyweight and bantamweight grand prix tournaments either in the books or about to wrap up, Bellator MMA has announced the next weight class to feature the grand prix format.

During an episode of The MMA Hour on Wednesday, Bellator CEO Scott Coker announced that 2023 will see the promotion kick off a lightweight grand prix.

The news comes as the bantamweight grand prix, currently ongoing, gets back underway this weekend at Bellator 286. The semifinal round is featured.

“If you look at our roster, I think this is the best roster I’ve ever had at Bellator, and it’s taken us about four or five years to get here,” Coker told host Ariel Helwani. “We’ve got a lot of young kids I’m super-high on, and we’ve got a lot of good veterans, but if you look at our 155 pound weight class, with [Tofiq] Musayev, and Usman Nurmagomedov, and [Patricky] Pitbull, and Benson Henderson — who is coming off a great win over Peter Queally — I think going into next year, one of the things these guys need to consider is that probably will be our 155 pound tournament next year.”

“So some of the fighters might want to stick around and stay a little heavier to try and go after that prize money of $1 million bonus that we give out at the end of the tournament,” Coker added.

Bellator’s lightweight division had long been one of its most popular, with talents like Eddie Alvarez, Michael Chandler, and Will Brooks earning championships at 155lbs inside the promotion. All three would go on to varying levels of success in the UFC, with Alvarez winning gold there as well, and Chandler still a top contender in the division.

In recent years, however, the weight class was held up by Patricio Pitbull, who had obtained double-champ status with titles at both 145 and 155lbs. He eventually vacated his lightweight title, paving the way for brother Patricky to capture gold. 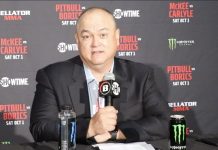