With brother Farid having secured a UFC deal on Dana White’s Contender Series earlier this week, the stage was set for Javid Basharat to have a big night at UFC Vegas 60.

Basharat, undefeated heading into Saturday’s contest, was paired up with Tony Gravely, a former CES MMA bantamweight champion and winner of two straight.

Afghanistan’s Basharat ate a leg kick early, as Gravely’s game plan appeared to involving attacking that lead leg early. Several more kicks would target the limb as Gravely kept the pressure up early. Basharat would eventually answer back with a leg kick of his own; in a clinch, Gravely would come close with a knee, but a clash of heads would open a cut up on Basharat’s eyebrow.

Along the fence, Gravely would clamp on with a bodylock, working to get Basharat down. Bashrat wouldn’t remain down long; a mat return from Gravely followed, but Basharat came right back up. The ref then pressed pause, allowing a doctor to check on Basharat’s eye, but the fight was allowed to continue. Back underway, Basharat appeared to find his range, working on the outside and getting his jab going. Basharat then changed levels and landed a takedown; Gravely defended with a guillotine, then scrambled out.

Gravely opened round two with a takedown, which forced Basharat to scramble and escape. Gravely briefly had him down again care of a mat return, but again Basharat popped up. Off the break, Basharat landed a kick to the body. Gravely pursued another takedown, but got sloppy and wound up on bottom. Basharat had plenty of time to work, moving to half guard and dropping a few elbows. Gravely eventually was able to move to his knees and try to power up, though he had to contend with a d’arce attempt, albeit briefly. Following a close first round, however, Basharat had a clear edge in the second. At the end of the round, Basharat wobbled Gravely with a front kick, followed up with an elbow, and had his opponent on skates at the buzzer.

The third round saw Basharat put the pressure on. He did eat a sizeable shot from Gravely, which had the Afghani fighter switching stances. But Basharat continued to press, firing kicks, working his jab, and even adding a spinning kick late. Gravely was running out of time, likely having lost at least the second and third rounds. Gravely would take a big swing in the final ten seconds, but they would head to the scorecards. 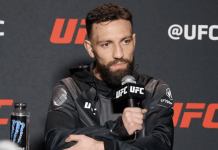 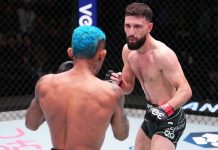