Following a couple of opponent changes earlier this summer, Gillian Robertson threw down with a former training partner in Mariya Agapova at UFC Vegas 60 on Saturday.

Robertson, the women’s flyweight leader in submissions and finishes, was looking to bounce back from a loss to JJ Aldrich. Agapova was in search of a win after falling short to Maryna Moroz in her last fight.

Robertson took the fight right to the mat early on Saturday, and while Agapova got back up, Robertson went back after a leg and pursued another takedown. However up against the fence, Agapova began smashing the side of the head with elbows. Robertson looked close to going out or having the fight called, but she managed to survive. Agapova would later give up her back, recover, then find Robertson on her back once more. Agapova fought hands while against the fence, and separated.

With Robertson pursing another takedown in the final minute, Agapova again wailed away with hammer fists and elbows. But Robertson got the fight to the mat, and locked up an arm-triangle choke that she could not complete by the end of the round.

Agapova opened round two with a telegraphed spinning back fist, and a kick that was executed considerably better. Robertson however landed a trip takedown a minute in that was beautifully executed. No damage taken this time; Robertson moved to mount, with Agapova giving up her back. Robertson got under the neck, and Agapova couldn’t even fight the hands — instead being choked unconscious! That’s six submissions in the UFC’s women’s flyweight division for “The Savage.” 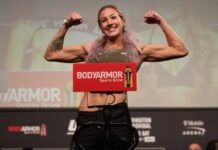 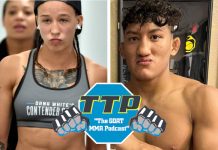