Paris, France – The first UFC event in France brought out some of the UFC’s French fighters to put on a show for their home country and lightweight Benoit St.Denis is excited to fight at home against Gabriel Miranda at UFC Paris on Saturday.

“You know I’m a very happy man because I started in MMA in 2019. I turned pro very early 2019 setting the long term goal of taking less than 2 years to go to the UFC. It took me two-and-a-half years,” St.Denis told Cageside Press among other media on Thursday.

“I was a bit unhappy because I consider Christos a good gatekeeper. He has only been losing against top 15 or champions of the weight class like (Charles) Oliveira, Thiago Moises, Gilbert Burns, all those guys. He did a very tough fight on a split decision against Drakkar Klose,” said St.Denis.

“I wanted to test my skills against this guy, but getting injured is part of the job we are doing. You train as much as your body is giving you the opportunity to do so injuries part of life and part of fighting life so I’m happy that I’m not the one that got injured.”

His new opponent makes his UFC debut against him at UFC Paris.

“Gabriel Miranda is a tough opponent as well so it will be a great fight,” he said.

St.Denis said the styles between his former opponent and Miranda are a bit different, but since he had such a short camp he had to concentrate on himself.

“Last week we did a bit change in terms of sparring partners to get something that’s getting a bit close to Gabriel Miranda instead of Christos Giagos,” said St.Denis.

St.Denis looked at UFC London and how the crowd responded to the UFC coming to their city and hopes that Paris will show up and be just as good of a crowd.

“For all the UFC fans in France they are very happy about it. We could see yesterday at (open workouts) in front of the public and I think people are going to enjoy it,” he said. 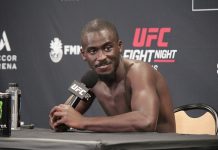 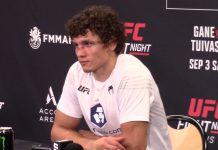