Poland’s KSW was back in Warsaw for KSW 73, with a heavyweight main event featuring a former GLORY kickboxing star making his MMA debut.

Heavyweight Wrzosek holds a win over Badr Hari, but that’s where things got dicey in his kickboxing career. Earlier this year, the pair were booked into a rematch, only for the fight to end early when a riot broke out in the stands. The bout was ruled a No Contest, and Wrzosek was banished from the promotion after blame was placed on him for the action of Polish fans in attendance.

The Polish fighter would later dispute that narrative. “I was beating Badr Hari in Hasselt and then my own fans want to spoil that for me? Come on,” he said in an interview with Vechtsportinfo.nl.

On Saturday in Warsaw, Wrzosek would face another kickboxer who made the jump to MMA, Tomasz Sarara. Sarara’s 1-0 record in the sport meant that the main event fighters of KSW 73 had a combined record of 1-0, and with their striking backgrounds, a finish felt likely.

Full results from the event can be found below. KSW 73 takes place live in Warsaw, Poland on Saturday, August 20, 2022 and streams live on KSWTV.com. 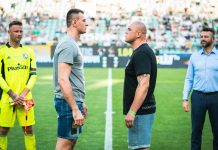