Jackson (1-1, 1NC), best known as the opponent brought in to lose to CM Punk in the former WWE star’s second MMA fight, will fight Pete Rodriguez (4-1) at the UFC’s October 15, 2022 Fight Night event.

News of the match-up was first reported by MMA Junkie. Jackson confirmed the booking on social media, after previously teasing fight news was coming soon.

Jackson, a part-time fighter who previously worked for UFC matchmaker Mick Maynard’s Legacy FC as a photographer, first joined the UFC in 2016. He was booked opposite Mickey Gall in the CM Punk sweepstakes to become the first man to fight Punk, whose transition from pro wrestling to MMA made headlines at the time.

Jackson lost the fight, winding up submitted in under a minute. But he was a shoo-in to face Punk in the wrestler’s second bout, and beat the man born Phil Brooks. The only problem, his performance was widely criticized, including by UFC President Dana White, who said at the time called Jackson a “complete f*cking idiot” who would never fight in the UFC again.

To make matters worse, Jackson’s win over Punk was overturned when he failed his drug test, something that did not come to light until years after the fact.

Defying all odds, however, Jackson returned to the cage earlier this year and picked up a DQ win over Dean Barry, after an eye gauging incident. To that point, Jackson had been losing the fight.

Rodriguez, a veteran of iKon Fighting Federation, made his promotional debut at UFC 270 back in January. “Dead Game” suffered his first loss as a pro against welterweight prospect Jack Della Maddalena.

The UFC’s October 15, 2022 Fight Night card is set to take place at the Apex in Las Vegas. The following bouts have been reported for the event: 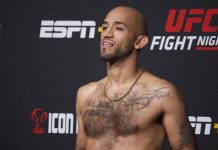 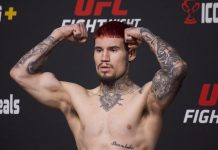