Last week on Dana White’s Contender Series, it was the Bo Nickal show. In week four, it was a second chance for Jack Cartwright.

Cartwright, a former Cage Warriors bantamweight champion, arguably could have been signed to the UFC directly. Instead, the promotion opted to bring him onto the Contender Series this year, perhaps because his last fight was a DQ win due to repeated headbutts by his opponent.

Cartwright, 10-0 as a pro, is up against Jose Johnson, who gets his second look on the Contender Series after losing a fight on the show back in 2020. Johnson will enter the night off two straight wins, over a couple of solid names in Mo Miller and Dulani Perry. In other words, a Contender Series winner (though Miller didn’t get a contract), and an Ultimate Fighter vet.

Weigh-ins for Dana White’s Contender Series Season 6, Week 4 go down Monday at the UFC Apex in Las Vegas, Nevada. Results can be found below. 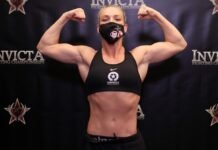