When Bryan Battle’s third UFC fight was announced to the public, it surprised a lot of people. If you hadn’t be closely following his body transformation on Instagram, you likely had not idea the Ultimate Fighter winner could come close to the welterweight limit. However, that’s exactly where he was booked.

While it may have caught the public off guard, it sort of did the same to Battle himself.

“It wasn’t something that I did intentionally, to be completely honest with you,” Battle said. “I really just had more time and resources than I ever had before to invest in myself and to invest in training.”

Given that time and resources, he went right to work on what he perceived as his biggest weakness from his previous fight. Up against a very athletic Tresean Gore, Battle felt he need to get stronger for some of those clinch and grappling exchanges. Although he got the result he wanted, he also dropped weight like crazy.

“After my last fight, I just wanted to get stronger. So I just did some athletic training, some weight training, and I was getting stronger and more athletic. I was getting faster,” he shared. “I was also losing weight when I wasn’t trying to lose weight.”

Having seen the weight come off so quickly, Battle decided to test out whether it was possible to go down a division. Not a month after his previous fight, he put it all to the test.

“Not even three weeks, four weeks tops, after I fought Tre[sean Gore], I did a little test cut,” Battle said. “The test cut went well, so I told my manager Jason House, Iridium Sports, match me up at welterweight, baby. I’m ready to make some noise down there.”

Battle will get his first chance to make noise in his new division this weekend at UFC Vegas 59. He’ll fight Takashi Sato as part of the ESPN+ prelims.

You can hear the entire audio of this interview at 1:50. 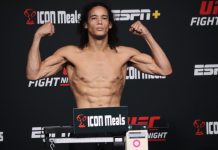