Week one of Dana White’s Contender Series Season 6 saw just one contract awarded, to Joseph Pyfer. At the end of the episode, a clearly annoyed Dana White proclaimed that he did no advance research into the fighters on the show, and it was all about proving something to him on one night only — not about career history.

“Next week, when you roll in here, show me who you are Tuesday night,” White exclaimed in a message to upcoming fighters on the show. “That’s the only thing I’m concerned with.”

Never before has White been so blunt about his expectations for fighters on DWCS. Now, it’s time to see who was listening as week two goes down Tuesday, August 2. Here’s our look at what to expect.

Prediction: Duncan is coming back after getting beat last season on the Contender Series. He lost to Slava Borshchev but was doing well up until the finish.

Campbell isn’t as talked about as Duncan but these guys, if they fought in a best of seven series, they’d go to fight seven.

The biggest edge might be the wrestling of Duncan. I feel that if he couldn’t keep Slava grounded he won’t be able to with Campbell either. It’s close on the feet where both are kind of similar. Both are really kick-heavy but I like the leg kicks of Campbell a lot more.

Defensively, well, neither are that good defensively. The flatter Duncan, being the smaller guy, gives me the confidence to think Campbell can chip away. Duncan could clip Campbell but going strike for strike I like the chin of Campbell to hold up more. I came into this fight expecting to pick Duncan but I’m taking Campbell. I feel he stays away from being held down and he starts to wear on Duncan as the fight goes. 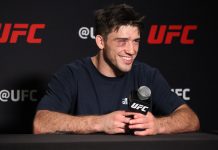