London, UK – UFC lightweight Michael Chandler made headlines recently, not for a fight, but for an altercation he had with a fellow lightweight at UFC 276.

Speaking to Cageside Press among other media at UFC London on Saturday night, Chandler spoke on the run in with his fellow lightweight.

“Was there?” Chandler said with a smile. “I walked down there with my beautiful wife who’s here with me in London. We had our seats and we were walking over there and the security guards came over there and basically said something to the effect of ‘Hey, he’s not going to sit over there.’ And I thought ok that’s interesting.”

“And we walked over. All the sudden I heard some chirping. Some very vile venom being spit in my direction. Didn’t know if that was being thrown at me or not. I look over and Dustin Poirier is pointing at me so he obviously had a bone to pick with me that night.”

With the lightweight picture starting to clear up a bit and fighters being booked up both Chandler and Poirier are beginning to run out of options for opponents.

Add on top that Nate Diaz is now set to main event UFC 279 against Khamzat Chimaev which takes Poirier out of that mix a fight with Chandler seems to be the next best option.

“Dustin Poirier, it’s no secret he’s made it very known that he’s ready for a fight. He’s thirsty, very thirsty for a fight, so he’s looking for anybody and everybody to throw venom at. I was the target that night and I was just trying to watch some fights with my wife,” Chandler said.

“If you think that’s the way that you’re going to get a fight with me, that’s the absolute opposite way of getting a fight with me. I’m not here to be in physical altercations in a public forum. Yeah, he was not happy with me that night.”

It’s not clear what Poirier’s problem with Chandler is, but the former Bellator champion made it clear that it will only serve as motivation if they ever get set to fight each other.

“In his mind he’s got some ill will toward me if you will, and it’s going to make it that much easier to knock him out whenever he oversteps if he and I do step inside the octagon. But I’ve not lost one minute of sleep thinking about Dustin Poirier and I’m going to keep on doing what I’m doing until a fight gets announced,” Chandler said.

“I’m going to go out there and finish my next opponent then become the UFC champion next year.”

Another name on Chandler’s mind, and one that he’s been calling out loud and clear since UFC 274, has been that of Conor McGregor.

“Hey Conor, when you’re ready to come back whenever you are ready, whenever the leg is 100% healed, because the sport of mixed martial arts the UFC as a promotion is better with Conor McGregor in it. But we need to see a healthy Conor McGregor inside the octagon so he doesn’t need to rush back, so I’m not waiting,” said Chandler.

“I think you’re going to hear some fight news coming pretty soon, and it could be me and Dustin Poirier. We’ll see.” 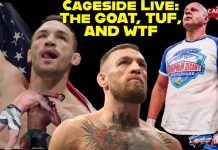