For an 8-0 fighter coming off a first-round finish, welterweight Roman Faraldo was incredibly self-critical in the aftermath of Bellator 283 on Friday.

The American Top Team fighter knocked out Luis Iniguez with just over a minute left in the first frame, and gave credit to his opponent for having “a concrete f*cking chin.”

“He took some big, heavy shots. Normally some of those shots put people out. A couple of those shots would have put anybody else out,” Faraldo told reporters including Cageside Press during his post-fight media appearance. “Tough dude, but I was just happy to be in there and actually in a real fight.”

One factor in Faraldo “forcing” his shots may have been the pressure he put on himself to perform. Each subsequent performance from the 29-year old has brought with it increasingly lofty expectations.

“You see it, I did it to myself today. I kind of let the hype get to my head and i tried to— I mean I did put him out in the first round, but you could see it, everything was just loaded up on, I was forcing shots.” That means it’s time to go back to the drawing board, and stop worrying about what the media and everybody else says, Faraldo added.

Most fighters coming off a first-round finish are ecstatic, but in addition to his own self-criticism, Faraldo believes he may have broken his hand in the fight. With the last shot, potentially.

All that means there will be no callout from the ATT fighter. “I got sh*t I got to work on mentally before I do anything like that.”

Roman Faraldo is usually self-critical when it comes to his fights, he later told Cageside Press. “Definitely. I was just sitting in the back talking to my corner, everybody’s happy with my performance, but they also know, we all know what I’m capable of, and that is not it.”

Faraldo regrets calling the finish ahead of the fight, despite living up to the prediction. “I didn’t need to call it, I didn’t need to put that pressure on myself. I could have went out there and fought my fight and put him out in the first round without all the pressure. So that’s what I need to do, I need to go back to the drawing board, just go back out there and have fun, do what I do and let the fight come to me.”

Watch the full Bellator 283 post-fight media appearance from Roman Faraldo above. More coverage from the event can be found below. 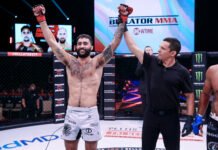 Bellator 283: Archie Coglan Doesn’t Have a Hit List — Yet