Las Vegas, NV — Cody Brundage questioned why he fights prior to his UFC Vegas 58 match-up with Tresean Gore. But after securing a knockout win Saturday night, he had his answer.

“You have the weirdest thoughts before you fight. I’m like ‘why do I do this again? I don’t get it,'” Brundage (8-2) told media outlets including Cageside Press following the bout at the UFC Apex. “And then we win, I’m like ‘okay, I get it. I can’t wait to come back.'”

Starting back before his last fight, Brundage actually did find a reason for why he fights. His daughter, Kingsley, suffers from an extremely rare genetic disorder that leaves her prone to epilepsy, seizures, and developmental delays.

“I never really had a ‘why’ for why I fight. Obviously to be champ, or I love fighting. Those are all good reasons to fight, but I think it kind of clicked for me right before my last fight,” Brundage stated. “If I’m gone, and my daughter potentially needs us for the rest of her life, I just want her to be taken care of forever. I don’t want her to ever have to worry about anything, and that’s a pretty powerful why.”

With just three years as a pro under his belt, Brundage has his wrestling background to rely on, but noted that he’s training with a “cream of the crop” striker in Dustin Jacoby. Plus Josh Fremd, another great striker and knockout artist. “I think people really underestimate how well-rounded I am, and sometimes you get caught and pay for it like Tresean did tonight. He 100% thought I was going to wrestle all night.”

“To get a knockout in the UFC feels good,” Brundage added, “and it just validates all the hard work. I told coach that’s a ‘we’ project. He’s given me so much time, so much effort and it feels good to go show the fruits of that labor.”

Brundage and Gore had an intense weigh-in, with Gore chirping quite a bit. “He told me ‘shoot all night, I’m prepared for anything,'” Brundage recalled of the exchange. “Except I guess an overhand.”

Watch the full UFC Vegas 58 post-fight press appearance from Cody Brundage above. More coverage from the event can be found below. 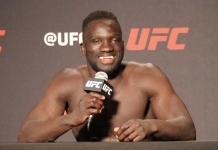