UFC featherweight Giga Chikadze is set to return for the first time since his January loss to Calvin Katter.

Promotion officials announced the news during Saturday’s UFC Vegas 58 broadcast on ESPN. The bout joins Cory Sandhagen vs. Song Yadong, with that bantamweight fight topping the card. Chikadze vs. Yusuff serves as co-headliner.

Prior to running into Kattar, Chikadze had been on a nine-fight win streak, with seven of those victories coming inside the octagon. Among the notable names the highly-touted kickboxer has defeated are Edson Barboza, Cub Swanson, and Brandon Davis.

Three straight finishes in his last three wins propelled Chikadze into the Kattar bout, though he has soundly beaten in his first setback under the UFC banner.

Yusuff will enter the bout off a win over Alex “Bruce Leeroy” Caceres. A winner on Dana White’s Contender Series in 2018, Yusuff won four straight fights to start his UFC run, including victories against Andre Fili and Gabriel Benitez.

The UFC’s September 17 card has no location or venue attached, though the following fights have been reported for the event: 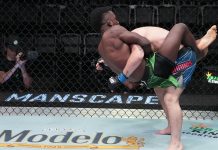 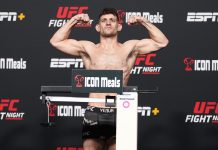