Turcios had been matched up with Canada’s Aiemann Zahabi, who had not fought for over a year following a knockout win against Drako Rodriguez.

Round one began with Turcios stomping the canvas and yelling at Zahabi who spent most of the round apprehensive and at times telegraphing his movement. Turcios landed plenty of heavy body kicks and pressed the action for most of the round.

Round two Zahabi began to let loose a bit with his attacks yet still stayed very careful choosing to attack with mostly leg and calf kicks and then attacking with overhands. For most of the round Turcios remained aggressive, and Zahabi was very calculated.

Round three Zahabi seemed to begin to take control early in the round. Zahabi leg kicks and Turcios continued to stay aggressive, but his attacks began to be predictable. He remained aggressive, but not landing anywhere near as much as Zahabi did. Zahabi was the matador in this fight as he caught Turcios on counters pretty easily. In and out, avoided getting hit and landing on Turcios. Not the most fan friendly fight, specially with Turcios involved, but a good game plan set by Zahabi. 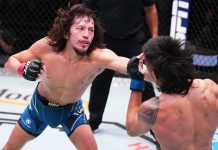