Next weekend’s UFC Long Island card on ABC has shrunk a little.

The event, which will air on U.S. broadcast network ABC, had been expected to feature Billy Quarantillo vs. Bill Algeo in the “Battle of the Bills” (there seems to be a lot of that going around lately), as well as Herbert Burns vs. Khusein Askhabov.

Both match-ups were set for the featherweight division. However, with both Quarantillo and Askhabov withdrawing from their respective bouts, the UFC has opted to pair up Algeo and Burns.

Algeo reported news of the booking on his Instagram Story. Quarantillo also revealed that he was forced out of the bout due to a leg injury he’d been dealing with over the past couple of weeks.

The UFC has yet to officially announced the match-up.

Algeo (15-6) most recently competed in January, where he earned a unanimous decision victory over Brazil’s Joanderson Brito. Burns (11-3) will be fighting for the first time since a 2020 TKO loss at the hands of Daniel Pineda. Coincidentally, Burns had been scheduled to face Quarantillo last year, but was forced out of the fight due to injury.

UFC Long Island (UFC on ABC 3) will take place Saturday, July 16, 2022 at the UBS Arena in Elmont, Long Island, NY. The following bouts have been reported for the event: 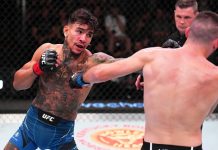 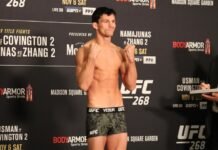