The occasion, plus a recent fight of his own, has him thinking about his own legacy.

“My last fight, even though I lost, I think it was super close, the judges. But the memory— still nowadays, people stop me on the street, and they [say] ‘bro, that fight!’ So that changed my perspective a little bit,” Burns told Cageside Press at the event. “I want to give the fans that memory, that moment, especially people at the arena, the die hard fans that go buy the Pay-Per-View, I want to give those moments, those five minutes, fifteen minutes that people are like ‘wow!'”

So while the goal is still gold, leaving memories with fans has become key for the Brazilian. “For sure I want to become a champion, that’s a personal goal I want to accomplish. But to leave on my legacy, I want to leave more moments like that, but for sure with a win — like I left in my last fight, but with a win in the next one.”

The Chimaev fight may land Burns in the UFC Hall of Fame as it is. Their hard-fought war at UFC 273 this past April was regarded by many as an instant classic. It’s certainly in the running for Fight of the Year.

“For sure. I do believe in a couple years, that fight will be inducted in the Hall of Fame,” Burns predicted. “I never thought it, I didn’t want it— I’m that kind of guy that sees Fight of the Night, Performance of the Night, I’d rather have Performance of the Night. But [you] end up getting in a couple wars— like I said, I like the memories that people brought to me; ‘bro that fight, I was going crazy.’ So I want to give more memories. I think that fight will be in the Hall of Fame, but looking forward to getting more fights like that.”

He’ll have the chance to make more memories soon. In terms of a return date, Burns told us that “I’m trying to get the next fight ASAP, September or October.”

Watch our full interview with UFC welterweight Gilbert Burns above. 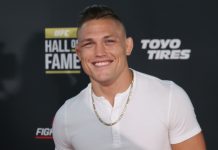