“Lil Monster” has never been shy about her former career: she was an exotic dancer, who once penned a book called The Stripper Bible. Now, however, it’s full speed ahead in mixed martial arts, and the results are paying dividends.

“It feels amazing to be able to put all of my focus, all of my energy into the sport that I love so very much, which is UFC, which is MMA, which is being inside of that octagon and being a part of the sport in general,” Demopoulos, who has put in plenty of time on the submission grappling circuit, explained. “This is my passion, and I’m so honored to be able to continue to put on good performances, and put my whole heart into everything I’m doing.”

It’s not just Demopoulos’ dedication to the fight game that is paying off. So too are her post-fight antics: at UFC 270, she jumped into the arms of Joe Rogan, with the clip instantly going viral. Saturday at the Apex, she did the same with Michael Bisping.

There’ll be more memes to come, and that’s more attention for Vanessa Demopoulos, which is no doubt good for her fighting career. But asked who had the better embrace — longtime broadcaster and podcast host Rogan, or ex-champ Bisping — Demopoulos sided with the UFC’s long-serving color commentary man.

“Joe’s was way better! Even though both of them, I forced it upon them,” Demopoulos said with a laugh. “Neither of them had an option.”

It’s all in good fun, but “The Count” might have been a little hurt.

Rogan > Bisping according to @monster_demo 😅 #UFCVegas57 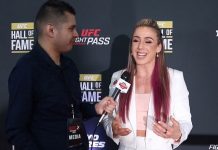