Though Aubin-Mercier (14-5) walked away with the split decision win, Schulte himself is still of the opinion that he won the fight. To OAM, it’s a strange question, because at the end of the day, the outcome is set in stone.

Instead, Olivier Aubin-Mercier is looking ahead to his next fight, at PFL 4 in Atlanta this Friday. There, he’ll take on last year’s lightweight champion, Raush Manfio. Only, it’s a fight that puzzles the Canadian, in the sense that he’s unsure of why it was booked in the first place.

“I think it’s a weird match-up, but at the end of the day, I’m going to fight everybody in the division. All the best guys, I’m going to fight them since it’s a tournament. I don’t care if I’m fighting them right now or after,” Aubin-Mercier explained. “I do feel a little bit bad for Manfio, since I think he deserves to do the [playoff] tournament, but other than that, who cares?”

In this case, it seems OAM himself just might. “It’s just, the thing I got, I think the four best guys were me, [Natan] Schulte, Manfio, and [Clay] Collard, and I think all four of us should have done the tournament,” he continued. “But I don’t think the best guys are going to be in the tournament this year, since I’m fighting Manfio, and I fought Schulte already. I think it’s a weird match-up, like I said. I don’t understand really why there’s four winners that fight winners, and one of them fights a loser. I don’t want to take anything away from the loser, but I think every winner should fight a loser. It’s not fair if that’s not the case.”

It should work the same in reverse, he added. “The same thing goes for the losers. I think they should all fight winners. Now, there’s just one of them who fights a winner, which is Stevie Ray. And not only does he fight a winner, he fights after everybody. So I think it’s kind of unfair for him, I think it’s unfair for Myles [Price], the one who fought [Anthony] Pettis; I think Myles is in the worst spot. I just saw him, just before, he’s a pretty big guy, and to make his weight twice in what, a month, month and a half? It’s pretty brutal.”

Price and Pettis fought at PFL 3 on May 6, making it barely a month and a half between fights for Price, who is in action this Friday.

“I don’t think it’s fair for him, but you know, life is unfair, and we still have the opportunity. I think we are lucky to have this opportunity with the PFL,” Aubin-Mercier finished.

A million dollars once again awaits the winner of the PFL season at year’s end — that’s a pretty big opportunity indeed.

Watch the full PFL 4 media day appearance by Olivier Aubin-Mercier above. The event goes down this Friday, June 17, 2022 in Atlanta, GA. 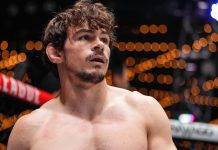