KSW 71, which will take place on June 18 in Torun, Poland, will be headlined by a lightweight title fight, as Sebastian Rajewski challenges champ Marian Ziolkowski. But a fight between K-1 & SuperKombat tournament champion Zimmerman and former KSW heavyweight champ Marcin Rozalski should also turn heads.

Promotion officials announced the news in a press release on Wednesday.

Zimmerman, with over twenty years of kickboxing experience, boasts a 103-13 record in that sport. At KSW 71, he’ll compete in MMA gloves under the K-1 ruleset, across three five minute rounds. The Dutch striker known as “The Bonecrusher” holds wins over Jerome Le Banner, Rico Verhoeven, Stefan Leko and others.

For Rozalski (7-4 MMA), he’ll be returning to KSW for the first time since 2017, when he defeated Fernando Rodrigues Jr. at the historic KSW 39: Colosseum. Rozalski hasn’t exactly been idle since: he’s competed in both kickboxing and bare-knuckle boxing in the ensuing years, most recently losing to Josh Barnett in the bare-knuckle realm.

Lightweight champion Ziolkowski (24-8-1), who won the title vacated by Mateusz Gamrot in 2020, will be looking to make his third consecutive title defense against Rajewski. Currently on a three-fight win streak, Ziolkowski most recently won a unanimous decision against former KSW welterweight champ Borys Mańkowski.

For his part, Rajewski (12-6) has won three straight fights under the KSW banner, most recently picking up a unanimous decision win over UFC veteran Niklas Backstrom. 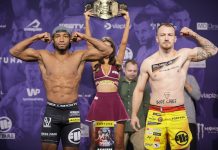 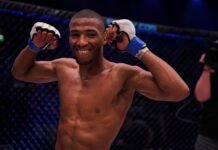 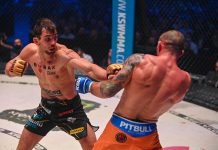