Jorge Masvidal is back in the news, and for a change, it’s not about the attack on Colby Covington. Kevin Holland is a hero, Nick Diaz wants a title shot, and Yoel Romero hits really hard. It’s your Sunday MMA Quick Hits following a UFC-free week.

After arguably the biggest win of his career at UFC Vegas 55, where he picked up a decision against Santiago Ponzinibbio, Michel Pereira called out two names: Nate Diaz, and Jorge Masvidal.

The Diaz callout was all about entertainment, Pereria suggested, while the Masvidal callout was more personal. In his post-fight media scrum, “Demolidor” claimed Masvidal had slid into his wife’s DMs, for some reason sending the prayer emoji.

“Gamebred” had something to say about that the following day — and had a screenshot as well.

“How crazy a world and how far has society fallen that this idiot [Pereira] would use his wife to hopefully one day get a paycheck and create a fake narrative to try and get a fight with me, when clearly he sees she slid in my dm? Wishing you guys the best,” wrote Masvidal on social media, before adding a pointed hashtag — “#marriagecounselor.”

How crazy a world and how far has society fallen that this idiot @UfcPereira would use his wife to hopefully 1 day get a paycheck and create a fake narrative to try and get a fight with me when clearly he sees she slid in my dm? Wishing you guys the best #marriagecounselor pic.twitter.com/M5MwwuH2Le

Kevin Holland Does It Again

Kevin Holland may be MMA’s first bonafide superhero. After foiling a car thief, then stopping a shooting, he’s now rescued a driver from a tractor trailer that had flipped after the driver lost control.

Holland recounted the incident while speaking to MMA Fighting recently.

“I’m driving the Regal, the old school, kind of like my Batmobile,” Holland explained. “Everyone knows Batman is my favorite character, that’s probably why I intervene in all of these things. I’m driving down the road, enjoying some good old 80s and 90s music, just cruising. It’s fast but it’s cruising, and then I look over to the right hand side and this guy looked like he was trying to get on the freeway pretty quick.

“I looked back straight. I looked back to the right hand side and he’s sliding sideways. I’m like gosh. I pull the Regal over, glad I put the new brakes on there. Hopped out, ran over there, jumped on top, ripped the door open, got the guy out.”

For the first time in three incidents, however, Holland admitted that he was scared, especially with fluids pouring out of the truck.

“Every other time things have happened, I’ve been calm, cool and collected. This time, I’m scared. I’m like, the truck’s going to blow up. The guy gets back in his truck! He’s like ‘I need my phone.’ I’m like ‘bro, I got a second phone in the car, you don’t need your phone. We’ve got to go.’ He’s like ‘I’ve got to go get my sh*t.’”

Holland did help the man retrieve his belongings, by which time the police had arrived. But despite being scared about the truck potentially igniting, Holland revealed he was involved in yet another dire situation that he’ll never speak of.

“I’ve got another situation that’s way more wild than that, I’ll never speak on it,” Holland revealed. “Yeah, after that situation, I was like ‘how do I keep getting put in these situations?'”

In the meantime, get the man a cape. Holland returns to action — the other kind of action he’s known for — next month at UFC Austin.

Cue the collective groans: Nick Diaz, who hasn’t won a fight in over a decade (literally), wants a shot at Kamaru Usman. Diaz thinks he can beat “The Nigerian Nightmare.”

Confidence can serve a fighter well, but this is past the point of confidence. Nothing in Diaz’s fight against Robbie Lawler suggested he’d even go the distance with Usman.

Diaz expressed his desire for a title shot while speaking to TMZ last week.

“[We’re] working on end of the year,” Diaz stated in regards to a timeframe for his return. “I’m just focused on my training right now. If I’m going to fight, I want to fight for the title.”

He’d add that he prefers to just “Just skip all the mess. I don’t need to go in there and get my ass whooped by one of the young guys, anyway— and it’s not that I won’t win. It’s just not motivating to fight somebody that’s— I want to fight for the title. I’m 38 years old.” 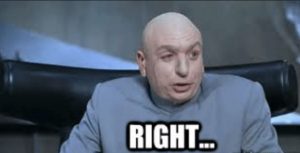 How hard? Check out this X-Ray of recent opponent Alex Polizzi’s jaw. All the best to Polizzi in recovery, but dammnnnn….

Our own Eddie Law, Alex Behunin, and Gabriel Gonzalez look at the UFC Vegas 55 judging controversy, open scoring, and more in the latest edition of Cageside Live. 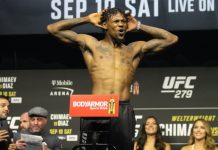