After a year and a half on the sidelines, dealing with injuries that resulted in a featherweight fight against Norma Dumont being scrapped last year, “The Preacher’s Daughter” is back to 135 pounds this weekend. She’s up against Brazil’s Ketlen Vieira, who is getting her second straight former champ after winning a decision over Miesha Tate last fall.

Also on Saturday’s UFC Vegas 55 card, flamboyant striker Michel Pereira faces off against #14-ranked Santiago Ponzinibbio, as “Demolidor” looks to break into the rankings himself.

Weigh-ins for the event go down Friday in Las Vegas; results can be found below starting at 12PM ET, 9AM PT. 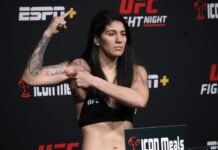