The Global Titans boxing event set to feature the likes of Floyd Mayweather Jr. and Anderson Silva this weekend has been postponed.

Just a day out from the event, organizers opted to pull the plug in the wake of the death of Dubai’s ruler, UAE president Sheikh Khalifa bin Zayed Al Nahyan.

In a statement, promotion officials wrote that “We are deeply saddened by the announcement of His Highness Sheikh Khalifa bin Zayed Al Nahyan, UAE President and Ruler of Abu Dhabi’s passing away earlier this afternoon.”

With the country entering a 40-day mourning period, the decision was made to push back the event — with a new date set to be announced soon.

“Out of deepest respect and due to these unforeseen circumstances of Force Majeure, the Global Titans Dubai event which was scheduled to take place on May 14th at the Burj Al Arab Jumeirah has been postponed until further notice, with a new date to be announced very soon,” the promotion stated. “We apologize for any inconvenience this may cause and reassure fans that this spectacular event will be staged in future.”

The boxing spectacle had been billed as “The Showcase in the Skies of Dubai,” with the event being held on the rooftop of the Burj Al Arab hotel. Both Mayweather and Silva were set to compete in exhibition bouts.

“The Spider” went 2-0 in the ring in 2021, beating former champ Julio Caesar Chavez Jr. in a professional bout, then knocking out Tito Ortiz in an exhibition contest. Silva’s fight Saturday was to come against another MMA fighter making the jump to boxing, Bruno Machado. 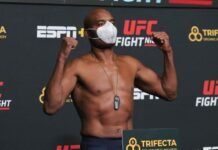