Charles Oliveira missed weight for his lightweight title fight with Justin Gaethje at UFC 274. Gaethje was submitted in the first round and now Charles Oliveira will be challenging for the vacant lightweight title in his next fight. Who he faces could drastically alter the shape of the division moving forward. Today we will be looking at what is next for the losers of UFC 274.

Gaethje is now 1-2 in his last three fights with both of his losses being for the lightweight title. He should be ranked somewhere between number four and six in the division and should probably fight Beneil Dariush. Dariush is on a long win streak and won his last two fights over Diego Ferreira and Tony Ferguson. He definitely needs one more win before fighting for a title — and the plan had been to book Dariush against Islam Makhachev. However, with the title vacant, Joe Rogan pulled Dana White aside and asked him to scuttle that plan. It seems White is considering it, meaning it could be Oliveira vs. Makhachev next, perhaps in Abu Dhabi in October. As for Darisuh, who better to get him to the next level than a man who has fought for the belt in two of his three last fights? And what better way for Gaethje to rebound?

Rose Namajunas lost her strawweight title by split decision against Carla Esparza at UFC 274. Esparza won the first-ever UFC women’s strawweight title with a win over Namajunas in 2014 and has repeated history eight years later. Throughout the strawweight division’s history, most title holders losing their belt have been granted immediate rematches. Joanna Jedrzejczyk and Weili Zhang both got one when they lost their titles to Namajunas.

Since Esparza only won by split decision it would be fair if the UFC gave Namajunas an immediate rematch. The problem is, the pair were booed out of the building, and Dana White has already downplayed the possibility. If he sticks to his guns, then the winner of the rematch between Jedrzejczyk and Zhang is next in line. White confirmed as much Saturday. In that case, give Rose a fight with Marina Rodriguez.

Namajunas’ next fight: Rematch against Esparza for the title or Marina Rodriguez.

Tony Ferguson is on a four-fight losing streak after being knocked out in the second round of his bout with Michael Chandler at UFC 274. In those four fights, he has lost to Justin Gaethje, Charles Oliveira, Beneil Dariush, and Michael Chandler. He should be looking to fight someone outside of the top ten in his next fight. Conor McGregor would be perfect but Michael Chandler set up a future fight with McGregor. Rafael Fiziev would also be a good choice for Ferguson. Fiziev has great striking and is a young up-and-coming prospect in the lightweight division. A win over Fiziev would be huge, but he’s fighting Rafael dos Anjos in July. Thing is, Ferguson can wait. He needs time off after eating that front kick. And while RDA and Ferguson have already fought, a rematch could be interesting.

Ovince Saint Preux won a split decision over Shogun Rua this past weekend. Rua is now 40 years old and has 41 professional fights in his career. He has had a long UFC career that includes his fight with Dan Henderson being in the Hall of Fame and winning the UFC light heavyweight championship in 2010. Being older in the sport of MMA will always have its downfalls but Rua looked very tentative in his most recent fight. That said, Shogun was steadfast going into this fight that he would finish out his deal, and Dana White appears content to let him. That means one last fight. Ideally against someone from the Pride era, but there aren’t many of those left, and none are in the UFC. So how about this: Sam Alvey.

Alvey has fought at light heavyweight, is on a disastrous streak, but is also being allowed to fight out his deal. That’s it. That’s the fight.

Khaos Williams lost a split decision to open up the UFC 274 card. There was a lot of that going around on Saturday: three split decisions on the main card alone, and five overall. This one came in a fight we all expected to see a finish in.

Next up for Williams, how about Cameron VanCamp? He finally debuted at UFC 274 and was knocked out by Andre Fialho. Both guys hit hard, this would almost certainly end up being explosive. 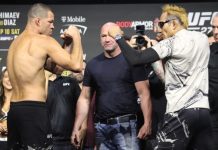