From that moment on, Budd became the biggest threat to Kayla Harrison’s lightweight dominance. In that sense, like Harrison, Budd has a target on her back, but that’s something the Canadian former Bellator MMA champ is accustomed to.

“I didn’t come here to be second, I came here to be the champion of this organization and this division,” Budd told Cageside Press during the PFL 3 media day on Wednesday. “Knowing that — and I’m very comfortable having that target on my back as a four time Bellator champion, knowing that people are gunning for me — I know that, but at the same time, I know that I’ve got an important fight on Friday night, and I’ve got Genah [Fabian] coming for me. So I’ve got to make sure that I handle that and do amazing in that fight.”

Budd (16-3) will have a massive edge in experience over Fabian come Friday, given the New Zealand native has just six pro fights. But still, Budd refuses to look past a fighter who is clearly the underdog.

“I’ve got so many goals that I want to execute on Friday night, and then after that, I’ll look at the next opponent,” Budd told us. “It’s step-by-step before the finals. So it’s making sure that I do this amazing, then go to the next one. But yeah. I’m comfortable with the target.”

Budd has had a lengthy career dating back to Strikeforce, then did a stint in Invicta FC. Now, she has the chance to make life changing money — something she didn’t even think about when she first entered the sport.

“I never looked at it from like a business standpoint when I first started. It was like, ‘I love this sport,’ I got paid basically nothing, and I just loved doing what I do. That’s why I started. After a while, you’re like ‘I’m making a living at this, I’m able to take care of my family,’ it changes a little bit. But at the same time, it’s money. I’m still doing it for the love of it, and I believe that with my quality performances, that will pay the bills.”

Fighting is a business for Budd these days — a family business. She’s married to former UFC fighter Lance Gibson, and is stepmom to Lance Jr., his son. The pair previously shared a home in Bellator, and competed on the same card in the past.

“I’m definitely not going to miss that,” Budd told Cageside Press with a laugh. “We did fight on the same card one night, and that was a lot to handle. We like to space it out a little bit.”

They’ve done just that: Gibson fought late last month, picking up another big win under the Bellator banner. Now, Budd rides that momentum into Arlington, TX at PFL 3. “It was huge for us and our family. We enjoyed that win, finished my training camp in Hawaii, the beach, oh my god it was beautiful there, then came to Texas. I’m here. I’m ready.”

Julia Budd faces Genah Fabian at PFL 3 this Friday, May 6, 2022 in Arlington, Texas. Be sure to check out Julia Budd’s full media day appearance above. More coverage can be found below. 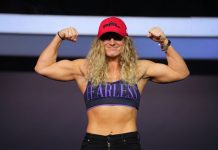