Back at UFC Vegas 50 in March, Miranda Maverick got herself back in the win column, snapping the first two-fight skid of her career.

And while Maverick (10-4) doesn’t necessarily see one of those fights as a loss, she’s well aware of how important the win was, given what an 0-3 stretch in the UFC can mean.

“The Maycee Barber fight, we can say what we will about that one, I still don’t think it was a loss,” Maverick told Cageside Press in an exclusive interview. “But the Erin Blanchfield one was a true loss, and I wanted to get my name back in the ring, and show that I’m there to stay. And I want to show that I have to well-rounded skill set, and grappling too.”

Maverick believes she did just that against Sabina Mazo. “I’ve really been trying to incorporate new stuff with my striking, not just go my typical bully self, and try to bull rush as my coach calls it. I’ve been trying to work backwards a lot,” she told us. “This was actually a fight where I got to be the bully a little bit. And I got to use a lot of well-roundedness. I got to show my striking, got to show my wrestling, get a lot of takedowns, let her back up and work some more striking, work out of the clinch.”

“Basically we just perfected the entire game plan, and then I just saw an opportunity in the second round and went for it.”

Mazo wound up cut from the promotion following the fight, which Maverick won by submission. Much like another former Maverick opponent, Lianna Jojoua, before her. The narrative that these fighters “suck” as a result is something that bothers Maverick.

“All these girls, after I fight them, then the fans are like ‘well they sucked.’ First off, that insults my performance, that’s a disrespect to my performance. Second off, these girls are in the UFC. They don’t suck,” stated Maverick. “They’re really good. And even other girls that you may see out there that look better than them, it’s usually because they’re facing lesser-skilled individuals, so it makes them look better.”

Back in the win column, Maverick has an idea of where she wants to fight next: London. Against Molly McCann. “No response from her, unfortunately, but I’m hoping enough eyes see that, I’m hoping Mick [Maynard, UFC matchmaker] sees that, I’m hoping it gets online and gets done.” July is “a little later than I wanted,” Maverick noted, “but hey, I’m down. Let’s do it. She wants it in her home town to make her a little happier, she wants to lose in her own town, that’s fine with me too.”

Watch our full interview with UFC flyweight Miranda Maverick above. 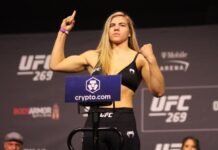 UFC Vegas 50: Prior to Accepting Mazo Bout, Miranda Maverick Was Asked to Fight Her Own Teammate 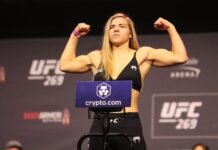 UFC: Miranda Maverick In for Mandy Bohm Against Sabina Mazo on March 12