Arlington, TX – PFL’s 2022 season kicks off with some tough matchups in including one at 145-pounds between 2021’s runner-up in Chris Wade and a former champion in Lance Palmer.

Speaking to reporters on Tuesday at media day Wade expressed respect for his opponent, but confidence that he will be able to get the job done on fight night.

“I think it’s a great matchup. I think PFL did a really good job this season seeing a lot of the big names that they brought together early on. It’s a really tough division so if you’re looking to duck tough fights you’re going to have a hard time here,” Wade said.

Wade is coming off a loss in the finals in 2021 where he dropped a decision to Movlid Khaybulaev in his first season at featherweight. With Khaybulaev out of the tournament in 2022 due to injury Wade comes into the season with a lot of confidence that he can get the job done this time.

“Movlid he won the title last year he’s the champion of last year, but he’s not here this year and then when you look at everything else with the season that I had and with the improvements that I’ve made since then, I feel like I’m the guy here. I’m sure everybody feels like they’re the guy they’re going to tell you that, but I put the results out there. And I always put the results out there. Every year, whether it’s 55 or here, it’s me down to the nitty gritty at the end,” Wade said.

“With him not being here I feel like this is my division.”

Watch the full PFL 2 2022 media day appearance from Chris Wade above. The event takes place this Thursday, April 28, 2022 at the ESports Stadium in Arlington, Texas. 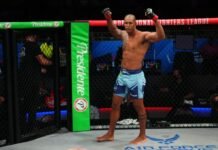