UFC Vegas 52’s main card saw four out of five fights end in submission, which is an even more impressive feat when you look at the circumstances behind those wins. Two guillotines by Canadian fighters, a kneebar by Claudio Puelles to set a promotional record (he has three), and the night capped off by Jessica Andrade capturing the first ever standing arm triangle submission in UFC history.

Big wins on one side, unfortunate setbacks on the other. Let’s take a look at four fighters who wound up submitted and one who lost a decision at UFC Vegas 52, and puzzle out what comes next.

The only option here is to slow the roll of Amanda Lemos. Jessica Andrade was a big jump. A Khamzat Chimaev jumping up to Gilbert Burns level jump. And being blunt, Lemos isn’t “Borz.” This was always a big ask, and says more about the current need for fresh blood at 115lbs than anything else.

As it stands, Rose Namajunas is expected to defend her title in a rematch against Carla Esparza. The winner of Weili Zhang vs. Joanna Jedrzejczyk will have a case for a title shot. Andrade herself already has one. None of those names are new to the division, and the closest thing to fresh blood at strawweight is Marina Rodriguez, coming off a win in March. For Lemos, Tecia Torres is tempting; we suggested booking Torres against Virna Jandiroba after UFC 273 earlier this month, but the former Invicta champ has a fight booked. She’s only recently turned things around, and coming off a loss to Mackenzie Dern.

At age 40, Clay Guida is in the twilight of his career, but he hasn’t really been getting completely outclassed in fights. He’s 2-2 in his last four, and got caught in a kneebar by the man who has the most kneebars in UFC history, Claudio Puelles, at UFC Vegas 52.

So, what’s next for Guida? He fought out his contract on Saturday. The UFC may opt to bring him back, even off a loss — he’s still got name value as a popular veteran, and 2-2 isn’t a terrible record by any stretch. But let’s keep him away from 20-somethings when he returns, shall we? Joe Lauzon fights Cowboy Cerrone next month. Guida’s never fought Cerrone, and had a win over Lauzon in 2017. Either of those names works; give Guida whoever loses.

Montana De La Rosa went the distance with Maycee Barber, and had a couple of submission attempts in the fight, but just couldn’t get the job done. She’s 1-1-1 in her last three fights, and outside the top 15. She’s also coming up on UFC fight #10, so let’s look at someone with equivalent experience. Canada’s Gillian Robertson is a gamer. She has the most fights in UFC women’s flyweight history at 12. These two have never fought. Both are coming off a single loss. It’s time.

What’s not so groovy about Lando “Groovy” Vannata’s UFC run? He’s never won back-to-back fights, despite debuting for the promotion back in 2016. Entering UFC Vegas 52, he was coming in off a win over Mike Grundy, and wound up submitted by Charles Jourdain.

Vannata always has fun fights, but he really needs to get some consistency going. Still, let’s give him another fun one. Gavin Tucker was supposed to fight Pat Sabatini earlier this month, but had to withdraw. If he’s healthy, book him against Vannata a few months down the road. The pairing screams banger, and Vannata can try to get his revenge on Canada.

Middleweight Jordan Wright opened the UFC Vegas 52 card against Marc-Andre Barriault, and wound up caught in a guillotine. That’s his second straight setback, making his next fight key. “The Beverly Hills Ninja” has been in some fun scraps, and had no idea what a decision looks like. That’s because win or lose, he’s never needed the judges’ scorecards.

Edmen Shahbazyan’s only been to a decision twice, win or lose. He’s on a three-fight skid, looking to turn things around after a very promising start to his career. He hasn’t fought since last November, and if he’s looking to bounce back in an entertaining scrap, this could be it. 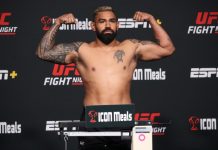