The UFC has lost a Cowboy just weeks after the final fight of his contract.

Alex Oliveira, Brazil’s “Cowboy,” has exited the company after fighting out his contract at UFC 272 last month. The 34-year old from Rio de Janeiro spent seven years with the promotion, competing 22 times in that span.

MMA Junkie was first to report news of Oliveira parting ways with the company. Having fought out his deal, the promotion opted not to re-sign the welterweight.

UFC Roster Watch, an automated service that monitors changes to the UFC’s athlete database, also noted that Oliveira had been removed from the roster on Monday.

Joining the UFC in 2015 after posting an 11-2-1, 1NC record on the regional circuit, “Cowboy” Oliveira made his debut against current contender Gilbert Burns on short notice. He’d lose that lightweight fight, but win his next three, quickly gaining a reputation as an action fighter. Despite making the lightweight limit more than once, Oliveira was better suited as a welterweight, and after missing the mark at 155 for a 2016 fight with Will Brooks, left the weight class completely in favor of 170.

Starting in 2018, Oliveira hit a skid, losing three straight, but turned things around with a couple of wins in 2020. A four-fight slump followed, however, culminating with his UFC 272 loss to Kevin Holland.

Through Oliveira’s 22-fight UFC career, he earned five post-fight bonuses: three Performance of the Night awards, and two Fight of the Nights. He was also named as part of the Fight of the Year in 2017 by ESPN. 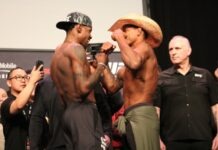