Bare Knuckle FC has booked its first show in Europe, and recent All Elite Wrestling signee Paige VanZant will headline the show.

BKFC is set to head to London, England on July 9, 2022, per promotion president David Feldman, confiming the news to Ariel Helwani. While VanZant will top the card, no opponent has been set for the former UFC star.

VanZant (8-5 MMA, 0-2 BKB) made her debut inside the BKFC ring last year, fighting twice and losing both contests by decision. Her February debut came against Britain Hart, while a July meeting with Rachael Ostovich, who VanZant defeated under the UFC banner, saw her fare no better.

Earlier this month, VanZant signed with pro wrestling outfit AEW, after making numerous appearances for the company alongside husband Austin Vanderford, American Top Team owner Dan Lambert, and numerous other ATT fighters. VanZant’s deal with the company left the door open for professional fighting, however. AEW has tended to have an open door policy on that front, as Bellator heavyweight Jake Hager also competes under the AEW banner.

VanZant has not picked up a win in any form of combat sports since a January 2019 submission of Ostovich inside the octagon. She would go on to lose the final bout on her UFC contract, to Amanda Ribas, before signing with BKFC as a free agent. 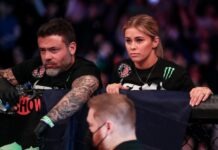