Prior to his most recent fight — the final bout on his contract with Bellator MMA — the former UFC champ had his back against the wall. Three straight losses had the potential to end his run with the promotion, but an upset over Islam Mamedov got him back in the winner’s circle, and now, his immediate future is set.

On Wednesday, Bellator officials announced that Henderson (29-11), 38, had signed a new, multi-fight deal with the company. That should stave off any further talk of retirement, at least for the time being.

“Smooth” entered Bellator MMA as a high-profile free agent back in 2016. He’d left the UFC on a two-fight win streak, and walked into an immediate title shot at welterweight, only to lose a one-sided decision against Andrey Koreshkov.

A win over Patricio Pitbull due to a leg injury was the only bright spot in Henderson’s early Bellator run, as he also dropped fights to Michael Chandler and Pitbull’s brother Patricky, all of which came back at lightweight. However, he’d hit his stride after that, winning four straight in 2018-19, and circling a title shot that never came, as then double-champ Patricio Pitbull held up the division while focused on the featherweight grand prix.

A second loss to Chandler, followed by defeats at the hands of Brent Primus and Jason Jackson, had Henderson on the ropes. The Mamedov win this past January has given him some breathing room, however, and a new deal.

No return date or opponent has been reported for Benson Henderson as of yet. The promotion’s next event, Bellator 277, is set for San Jose, CA on April 15, 2022. 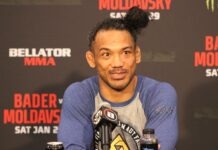 Bellator 273’s Benson Henderson Unsure on Retirement, But Mamedov Win “A Great Way to Go Out”