Once upon a time, yours truly argued that 2016 was the Year MMA Broke, in the same way that 1991 was the Year Punk Broke.

If you’re either too young or too old to get the reference, 1991: The Year Punk Broke was a behind the scenes look at the band Sonic Youth, but the documentary film also featured appearances from The Ramones, Dinosaur Jr., Babes in Toyland, and a then-little known trio calling themselves Nirvana.

Punk, of course, broke well before 1991, but it was the late 80s/early 90s eras bands like Nirvana, whose roots could be traced back to some of the early punk rock groups, that amplified it. They brought the music into the mainstream in a way that had never happened before; anyone curious about Nirvana’s influences could easily check out The Stooges, The Pixies, The Germs and so on.

In the same way, UFC London was the night UK MMA broke. Already being called one of the biggest Fight Night cards ever, Saturday’s event at the O2 Arena in London matters not because of any one single fighter, but because of how UK MMA showed out as a whole.

In the past, of course, there was Michael Bisping carrying the flag for the region. Popular fan faves like Dan Hardy and Ultimate Fighter winner Ross Pearson. But no card, top to bottom, has put the spotlight on UK MMA like this past weekend’s London event did.

Adopted Brit Muhammad Mokaev kicked off the event, setting up a submission of Cody Durden with a flying knee. The tap to a guillotine came in just under a minute. Wales native Jack Shore earned a unanimous decision over fellow bantamweight prospect Timur Valiev. Scotland’s Paul Craig secured a comeback triangle against Nikita Krylov, stating a case for a spot in the top ten.

London has been a hell of a destination to hold the first @UFC Fight Night outside of Vegas/Fight Island (and the couple of nights in Jacksonville) since the pandemic started. On to the fights! #UFCLondon pic.twitter.com/eclqt2hMij

That was just on the prelims. When the main card arrived, there was Molly McCann, landing one of the best knockouts in women’s MMA history care of a spinning back elbow on Luana Carolina. Paddy Pimblett stole the show, getting the entire arena chanting “oh, Paddy the Baddy” on his way out, before submitting Kazula Vargas. Arnold Allen remained perfect care of a co-main event knockout of Dan Hooker, while Tom Aspinall pulled off the submission of Russian Alexander Volkov to cap all the night.

And that’s the real story: the massive success of UK MMA, not just one big win, but battle after battle falling in their favour. It wasn’t a perfect night — Cory McKenna lost a split decision, with the dissenting judge watching a different fight than the rest of the planet, while Jai Herbert was starched by Ilia Topuria. But so rousing was the success of Team UK that the few battles lost were almost immediately forgotten in the celebrations that followed.

It all bodes well for the continued success of MMA in the region, and was enough to convince UFC President Dana White to announce a return to the UK later this year. Does it signal another title in the nation’s immediate future? Perhaps, perhaps not. MMA is a harsh mistress, and Bisping paid the iron price for his gold. It won’t be any easier for the next UK title challenger (likely to be Leon Edwards, possibly in July).

And of course, tempering expectations is important. Pimblett has all the makings of a star, and has proven an extremely charitable fighter to boot. As local fans were quick to point out after the event, underneath his brash personality, he’s a humble lad. But he’s been rocked in both his UFC bouts to date, and rushing him to the top could derail a promising talent. Molly McCann remains a 5-3 fighter inside the octagon, who is batting .500 in her last four fights.

At the same time, UFC London was magical enough — the perfect card for this particular writer’s return to the road after a pandemic induced two-year break — to make a believer out of even the most dubious of critics. The card showed the continued evolution of UK MMA, enough to believe that yes, perhaps we are entering a golden age for the sport in the United Kingdom. 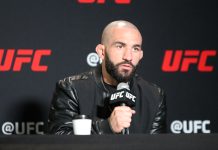 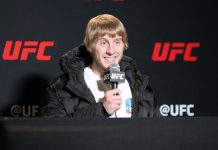