London — Cory McKenna, for once, is not the youngest fighter on the card at UFC London this Saturday.

The massive show planned for the O2 Arena over the weekend is the first trip back to the U.K. by the promotion since 2019, and will feature the debut of 21-year old Muhammad Mokaev — just a tad younger than cherubic McKenna, who turned 22 last July.

Not that McKenna (6-1), who won her way into the UFC via Dana White’s Contender Series, then picked up a victory in her promotional debut against Kay Hansen in 2020, cares about age.

“I never really valued the age thing too much. I was 15, fighting 30-year old women,” she told Cageside Press during Wednesday’s UFC London media day. “If anything, I spent my whole time growing up fighting that whole, ‘kid vs. woman’ kind of thing. For me, the age never really played a part, because I have so much experience despite my age.”

While she doesn’t spend much time thinking about her relative youth in the sport, opponents may overlook her because of it, McKenna agreed.

“I’m sure there’s probably an element of underestimating me. I’m young, I’m not necessarily the most biggest, scariest looking person,” she noted. “For me, that only plays into my favor. They’re going in there with false confidence or whatever, and I can just prove them wrong. So it doesn’t make a difference to me.”

McKenna trains alongside Maycee Barber, another young talent in the UFC. She shares the card with Mokaev, and those two have at least one thing in common: both set goals of being the youngest UFC champion.

That’s not the sort of pressure McKenna is putting on herself. There’s no time table to be champion, or any other specific goal.

“No. One thing I’ve kind of learned with this sport, there’s too much unpredictability and too many variables going into it,” she told Cageside Press. “I’ve had a lot of injuries, I’ve had a lot of long layoffs too, really, if you look at it. I think this is the second time I’ve had nearly an 18 month layoff in my career, which given I’m so young, that’s quite a lot. So one thing I’ve kind of realized, I can’t set necessarily time dates like that, because all I’m going to do is disappoint myself.”

For her, McKenna continued, “it’s a case of, I know that will come. When it comes, I don’t mind. I know that I’m working hard and I’m going to do my best to get there as soon as possible, but I’m not putting stress on how fast I get there or anything. I’m going to trust the process and take things one fight at a time.”

Watch the full UFC London media day scrum with Cory McKenna above. More coverage from the event can be found below. McKenna faces Elise Reed at the Fight Night card this Saturday, March 19, 2022 at the O2 Arena in London, England. 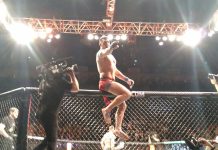 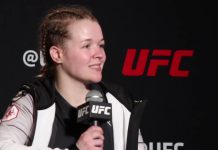 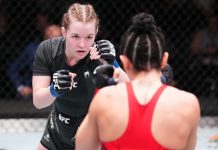