UFC Vegas 50’s post-fight bonus selections might have been most notable for who didn’t earn a Performance of the Night award.

The Fight Night card opened up with five straight finishes, the first time that had happened since UFC 265 last August. A strong card on paper, the event produced plenty of action, with the only let-down arguably being the main event, where Thiago Santos and Magomed Ankalaev fought in a hesitant affair that went the distance.

In total, there were eight finishes on the card, resulting in four Performance of the Night bonuses (no Fight of the Night was awarded). And somehow, none of those bonuses went to lightweight Drew Dober.

Dober’s single-round scrap with Terrance McKinney practically screamed bonus. Had the fight gone on longer, it would have been a lock for Fight of the Night honors, and as it stands, is in the running for Round of the Year. Taking the fight on short notice, McKinney came out guns blazing, lighting up Dober, knocking him down with a knee, and battering him with straights, hooks, and everything but the kitchen sink.

Somehow, Dober survived, even after eating knees and a head kick, and rallied back to knock McKinney down and win the fight. The TKO finish came at 3:17 of the opening round, and had there been fans in the building, they would have been on their feet.

No bonus for Dober, however. Instead, Azamat Murzakanov, Cody Brundage, Khalil Rountree Jr., and Song Yadong picked up Performance of the Night bonuses.

It’s hard to argue against any of the four as far as individual efforts go. Azamat Murzakanov, who won on the Contender Series last year, stunned Tafon Nchukwi with a third-round flying knee in his promotional debut, securing a comeback victory in a fight he’d been losing to that point. Brundage submitted Dalcha Lungiambula, while Rountree lit up Karl Roberson in the latter’s return to light heavyweight.

Song Yadong, meanwhile, made a statement in his first UFC co-main event, knocking former title challenger Marlon Moraes out with a right hand.

All four bonus-winning fighters will receive an extra $50,000 for their efforts. 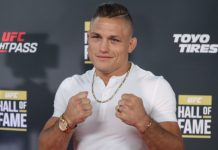