Japan’s RIZIN Fighting Federation is pulling out all the stops in April.

On Saturday, promotion officials announced via press release that RIZIN TRIGGER 3rd was set for April 16, 2022 at the Musashino Mori Sports Plaza in Tokyo, Japan. The show is the first night of a double header in Tokyo, with the previously announced RIZIN 35 taking place on April 17.

Three fights have been added to the RIZIN TRIGGER 3rd, including a couple of very familiar names:

Among them, a rematch between Yusuke Yachi (23-12) and Luiz Gustavo (10-2), who first met in 2018 at RIZIN 12. Gustavo won the fight care of a second-round knockout, sending Yachi on a three-fight skid. It seems the Japanese lightweight hasn’t forgotten.

“Gustavo started my losing streak and I’ve been wanting this fight for a long time. And now it’s finally happening so I plan to dominate in all aspects and pay my debt that I owe him,” Yachi was quoted as saying in Saturday’s press release. “I’ve learned how to come up with a game plan and I have many cards to play during the fight along with my basic skills evolving. I know I’m a different fighter.” 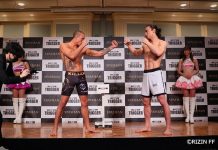