Airing live on UFC Fight Pass, the event featured two title fights: in the main event, Jonas Bilharino will face Jose Delano for the promotion’s vacant featherweight title. Delano got the nod after Bilharino’s originally scheduled opponent, Rafael Barbosa, was forced to pull out of the show.

In the co-feature, another top prospect, Gabriel Bonfim, will face Eduardo Gavron for the promotion’s vacant welterweight belt.

Bonfim, a.k.a. “Marretinha,” entered the night a perfect 11-0 as a professional, with no fewer than eight finished to his name.

LFA 126 takes place Friday, March 11, 2022 at the Complexo Ribalta in Rio de Janeiro, Brazil. The main card streams live on UFC Fight Pass, and gets underway at 9PM ET. Full results from the event can be found below. 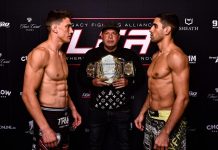