Albeit accidental, the Romanian fighter was the victim of repeated eye pokes in the bout, with Nzechukwu deducted a point in the third round as a result. Even with the point deduction, the bout wound up a split decision — but Negumereanu (12-1) is content with that.

“It was a split decision, but it was in my favor,” he told media outlets including Cageside Press following the fight. “So at the end of the day, I’m very happy about this.”

What he was not content with was the state of his eye during the fight. When the doctor was called in to check on the injury, Negumereanu admitted, he was genuinely concerned with his own well-being.

“To be honest with you, for one minute, I strongly believed my eye, it was very very badly hurt,” said Negumereanu. “And even my retina, I was afraid that my retina was effected. But thank god I was able to finish this difficult fight.”

After nearly two years on the sidelines from 2019 to 2021, Negumereanu intends to get back to training hard, to make his next fights a little less difficult. Most importantly, he’s hoping to stay busy in 2022.

“I really want to [have] at least another two fights this year, after this two years long break,” he said Saturday.

Watch the full UFC 272 post-fight press scrum with Nicolae Negumereanu above. More coverage from the event can be found below. 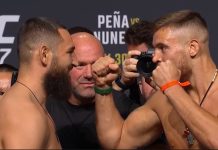 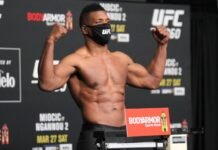