Las Vegas, NV – Boasting a four-fight win streak is a nice feather in the cap for any UFC fighter. When the names on that streak are Amanda Ribas, Michelle Waterson, Mackenzie Dern and Yan Xiaonan then you have something more; a claim to a UFC title shot.

For UFC strawweight Marina Rodriguez her bout against Xiaonan at UFC 272 on Saturday night was what she feels should punch her ticket to a title shot at 115-pounds. Rodriguez defeated Xiaonan via decision in their prelim bout.

Rodriguez (16-1) had a bit of a slow start against Xiaonan and she acknowledged as much.

“First thing is that I realize that there’s things that need to be done. The first round it took me a little bit too long to get in the game and find my distance. Lesson learned, got to work on that, and I’m happy that I got the win. I think I deserved it, but I can clearly see things that I need to be working on,” Rodriguez told the media through a translator at her post-fight scrum.

The title picture at strawweight is experiencing a bit of a log jam with champion Rose Namajunas expected to face former champion Carla Esparza in a rematch of their 2014 title fight. Esparza won the title that night, and with the rematch coming along with a possible rematch between Weili Zhang and Joanna Jedrzejczyk possible, Rodriguez may find herself on the outside looking in to a title bout.

“Honestly right now I know I’m top 3 in the world. There’s really nobody ahead of me that I think deserves it as much as I do. There isn’t a date still (for Namajunas vs. Esparza) which is a little bit worrying, but I know that whoever wins I have to be next in line.”

It has become normal for there to be a backup available to step in to a title shot on short notice should something happen to one of the fighters fighting for a belt, and Rodriguez expressed willingness to do so for a potential Namajunas vs. Esparza fight.

“If that’s what the UFC would like to do I would be more than happy to do it. This was already the fight that I had before the title fight. I was ready after last fight, but I had to do something I had to keep active. That’s why I took this fight. I think right now there isn’t a way out,” Rodriguez said.

Watch the full UFC 272 post-fight press scrum with Marina Rodriguez above. More coverage from the event can be found below. 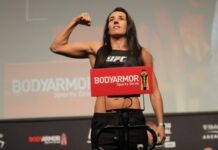