Friday’s PFL Challenger Series 2 card in Orlando, Florida was to put the spotlight on the welterweight division. And it still will — although two of the four fights set to unfold at Universal Studios will now take place at catchweights.

All fighters hit the scales on Thursday to weigh in for the event, which had seen a couple of fighters drop off the card on short notice. Among them, Lucas Barbosa vs. Troy Green, which fell off the map when Green withdrew. Socrates Pierre, meanwhile, was supposed to face Carlos Leal, only to be replaced by Korey Kuppe.

Kuppe successfully made weight on Thursday. Another fighter, however, did not, as Nathan Pierce came in 2.6lbs over the welterweight limit for his card opener against Chris Mixan. The bout has be set for a 174lb catchweight as a result.

The PFL Challenger Series 2 main event, meanwhile, was switched to a 177lb catchweight. Both Jarrah Al Silawai and Michael Lilly weighed in slightly shy of that mark.

* Bout changed to a 177lb catchweight

** Pierce missed weight by 2.6lbs, fight will move forward at a 174lb catchweight 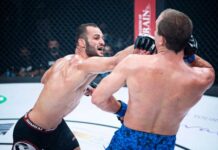