Miranda Maverick is the latest UFC fighter stepping up for a short-notice opportunity.

Mazo confirmed the booking after Maverick announced the news on social media. Both fighters will be looking to snap two-fight skids when they meet next month.

Maverick has suffered back-to-back losses in her last two outings, dropping decisions opposite Maycee Barber and Erin Blanchfield. The Barber result in particular had an air of controversy, ending in a split decision that easily could have gone the other way.

Prior to those setbacks, Maverick had picked up wins over Liana Jojua and Gillian Robertson, on top of a pair of wins under the Invicta FC banner.

In announcing the booking, Maverick said she’s been “staying in fight shape” for the opportunity.

Mazo entered the UFC with plenty of hype thanks to a pair of viral head kick knockouts in LFA. After dropping her debut, she went on three fight run before losing fights against Alexis Davis and Mariya Agapova.

UFC Fight Night 203, which takes place on March 12, 2022 at the UFC Apex in Nevada, is set to be headlined by light heavyweights Thiago Santos and Magomed Ankalaev. The following bouts have been reported for the event thus far: 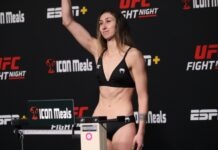