We’re back with another five prospects to scope out in this third installment of our Blind Reacting series. There are plenty of solid prospects floating around in the MMA world, and any one of them could be your next Anderson Silva, Georges St. Pierre, or Demetrious Johnson. We cover a slew of them each and every week in our Weekly MMA Prospect Report. Beyond that, here are five more prospects to consider — prospects we’ve never seen, nor covered, before.

Personally, I don’t know how I missed out on this guy considering he’s fought for ACB and M-1. Crazily enough, he was fighting for those big promotions at around 19-years-old. Now he is a bit more seasoned at 23. Sanikidze, since losing two consecutively in 2018, is on a nice four-fight win streak.

His biggest knock is he lets his opponents walk him down allowing them to set the pace. That’s because he’s so confident with his abilities he doesn’t mind fighting off his back foot. One reason being that his counter striking is arguably his best attribute. Not to mention he has some excellent takedown defense. Outside of just one missing fight to find footage on, he’s never been taken down.

More of a striker/kickboxer but lately he’s decided to wrestle more. I wouldn’t say he’s a great wrestler but he’s come a long way compared to a few years ago. Not the type of guy to chain wrestle. Instead, he blends in his striking and takedowns together so well it’s tough to know when he will shoot. He’s the same way with his striking as he mixes in kicks and punches, always throwing something different. Overall he’s hard to read. Sanikidze has a nice flow to him on the feet. He throws some slick combinations while the release and hands are quick from the hip.

At his age and with his skillset already, you can imagine how much better he will be in a few years. Sanikidze isn’t even near his prime and that’s a scary thought. He could use a few minor adjustments and where he’s fighting now in Oktagon out of the Czech Republic he’ll develop greatly over time. 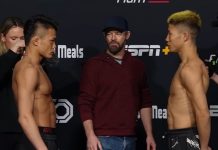 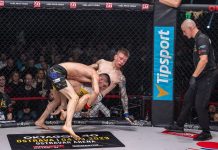 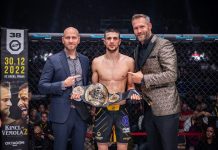